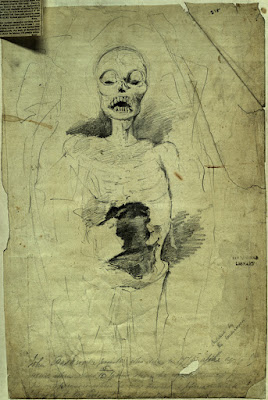 John Baskerville (1706-1775) is probably best remembered nowadays for the typeface which bears his name, but his genius also extended to stone engraving, japanning, book production, and the first commercial use of wove paper. To my mind, he is very much the archetypal Brummie, despite being born in Wolverley in Worcestershire, but then the growth of Birmingham has usually meant that its inhabitants couldn't ever possibly all be born here. He also added the tradition of religious scepticism to his world-view, which seems to have been one of the things which attracted him to the town. By his own will, after his death his body was buried in unconsecrated ground in the grounds of his own house, Easy Hill – it was on the site of the present Baskerville House, next to the library of Birmingham. I am heavily indebted to F E Pardoe's John Baskerville of Birmingham (Frederick Muller Limited, London, 1975) for the facts here, since that book includes many contemporary sources, which are rare in the accounts of what happened to Baskerville's body.

His house was sold in 1788 to John Ryland, who lived there until the house was wrecked in the Birmingham riots of 1791. The grounds were gradually used for other purposes after this, and the conical building surmounting Baskerville's vault demolished, although his body remained in situ. It was imagined that it had been removed, until it was discovered in 1820:
'…some workmen, who were employed in getting gravel, discovered the leaden coffin. It was however immediately covered up, and remained untouched until a few days since, when, the spot having been recently let for a wharf, it became necessary to remove the coffin, and it was accordingly disinterred, and deposited in Messrs. Gibson and Son's warehouse, where a few individuals were allowed to inspect it. The body was in a singular state of preservation, considering that it had been under ground about 46 years. It was wrapt in a linen shroud, which was very perfect and white, and on the breast lay a branch of laurel, faded, but entire, and firm in texture. There were also leaves, and sprigs of bay and laurel in other parts of the coffin and on the body. The skin on the face was dry but perfect. The eyes were gone, but the eyebrows, eyelashes, lips and teeth remained. The skin on the abdomen and body generally was in the same state with that of the face. An exceedingly offensive and oppressive effluvia, strongly resembling decaying cheese, arose from the body, and rendered it necessary to close the coffin in a short time, and it has since been consigned to his surviving connexions for the purpose of re-interment.' (John Langford: A Century of Birmingham Life, or A Chronicle of Local Events from 1741 to 1841, Birmingham, 1868, volume 2, pp. 358-9, cited in Pardoe, op.cit., p. 149)
Baskerville's body actually remained in the Gibsons' warehouse in Cambridge Street for the next eight years, and they used to charge people 6d to see the body. In August 1829 Baskerville's remains were moved to John Marston's shop in Monmouth Street (near Snow Hill Station), where it was opened again. It was at this time that the sketch which illustrates this post was drawn by local artist Thomas Underwood, and the piece of the shroud taken. These are both preserved in the Library of Birmingham, may be seen on the website, which is where I owe the pictures. Underwood wrote an account of making the sketch:
'This sketch was taken when the remains lay at Marston's the plumber in Monmouth Street (within a few doors of which I was then an apprentice with Mr Josiah Allen, the engraver), where they were on view for some days, and were seen by a number of persons, amongst others by Dr Male and his daughter, who lived at the top of Newhall Street. The effluvium made them ill, and I believe they were laid up for some time with fever. A surgeon in Newhall Street also went, who tore a piece from the shroud, which he incautiously put into his coat pocket and died in a few days. The only ill effect upon myself, who was there upwards of an hour, was a distaste for food for several days. The body was much decomposed, but the teeth were perfect; and the sketch shows correctly what I saw of the remains of the man who was an artist in every sense of the word, and will ever deservedly be famous as one of the worthies of our town, who spread its fame the wide world over.' (cited in Pardoe, op. cit., p. 150)
Mr Marston's request to inter the body in his vault in St Philip's (now Birmingham Cathedral) was refused because of Baskerville's atheism. At length a Mr Knott (or Nott), a bookseller, offered to inter the remains in his vault in Christ Church (in true Birmingham style, this church was where the floozie in the Jacuzzi now is). But there remained the problem of getting permission from Mr Barker, the churchwarden:
'On hearing the request, Mr Barker, with an unmistakeable twinkle of the eye, told Mr Marston it was impossible – "indeed, I keep the keys and at such time of the day they are on the hall table". Mr Marston was not slow to take the hint, and called. The door was opened by the butler, and there were the keys. Mr Marston asked if Mr Barker was at home; the servant said "No", faced about and walked off. Mr Marston took the keys, and the body in its reclosed lead coffin was carried "on a hand barrow covered with a green baize cloth", to its last resting place in Mr Nott's vault in Christ Church.' (W. J. Scofield, letter to the Birmingham Weekly Post, November 22nd, 1879, cited in Pardoe, op. cit., pp. 151-2)
A notice may have been placed in the local press at the time of the reinterment to say that Baskerville had been buried at Netherton, beyond Dudley; whether or not it was, this was the rumour that remained for a long period. The wanderings of the unfortunate Baskerville's corpse were still not over, however. In 1892 a churchwarden of Christ Church, found that there were 136 vaults under the church, but only 135 burials were recorded; under public pressure, the vault was opened. Baskerville's body was once again seen, and was cemented back up in the vault. The legality of this disturbance outraged Victorian propriety to such an extent that questions were asked about the matter in Parliament. Notwithstanding, a plaque to Baskerville, commemorating the identification of his remains, was erected on the wall of the church.
Baskerville's journey had one last step. Christ Church was demolished in 1897. The bodies from the catacombs were removed and since nobody claimed Baskerville's, it was reinterred in the catacombs in Warstone Lane cemetery, where it remains to this day.
Posted by Hound of Hecate at 8:07 PM